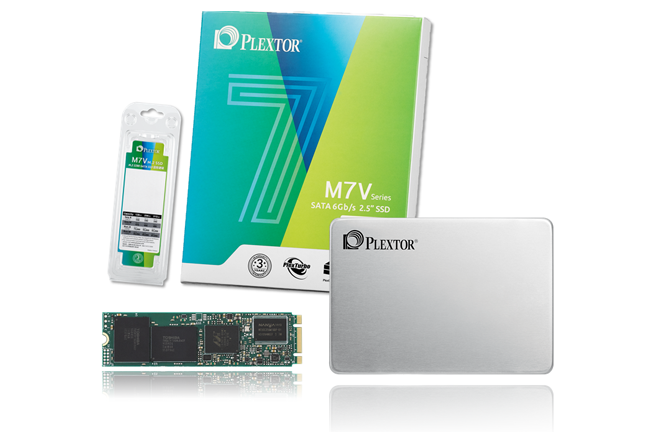 The key to dramatically increasing Plextor M7V's lifetime as a TLC SDD is through coupling the highest grade components from the industry with advanced firmware. The M7V series applies the new generation Marvell control chip, designed exclusively for TLC products, along with Toshiba's latest 15 nm process TLC NAND flash memory. It also applies multiple technologies developed exclusively by Plextor, including the tailor-made write acceleration technology PlexNitro, the Low Density Parity Check (LDPC) troubleshooting technology with three times the average rate, and PlexTurbo, a software that applies system memory to decrease the amount of reading and writing.

The result brings about the astonishing 2,000 times P/E cycle lifetime of the M7V series, 2 to 4 times as durable as a normal TLC SSD, providing the largest TBW (Total Bytes Written) for its users. Using the 512GB capacity version as an example, it has a TBW of 320TB. The M7V has set up a new milestone for TLC SSD products, marking a new page with its outstanding lifetime, P/E durability and stability, bringing forth an unforeseen top notch quality application.

Plextor's superb firmware and software technology has always been the key to surpassing and receiving recognition above products of the same level. Looking at the firmware technology applied, the M7V series uses the exclusive PlexNitro technology that differs from other TLC SSD products, allowing the M7V to not require reserving hard drive space, increasing its writing capability while keeping the most complete SSD storage capacity for its users, giving the user's the best return for their choice. Using the lowest capacity products of 128GB for example, when other TLC brands can only provide a true 120GB of storage space, Plextor can support a complete 128GB TLC SSD capacity.

The widely recognized PlexTurbo software can apply the system's DRAM to accelerate the SSD's read and write efficiency, allowing the M7V that has a designed sequential read/write speed of 560/530 MB/s, random read/write speed of 98K/84K IOPS to increase its speed by 6 to 10 times. PlexTurbo can also reduce the frequency of data writing, greatly increasing the lifetime of the SSD, bringing advanced efficiency for the TLC SSD.

Apart from PlexTurbo, the M7V series can also use two other additional softwares, the PlexCompressor & PlexVault - PlexCompressor can compress files that have a low usage rate while not affecting the SSD's efficiency, providing more available space for its user; PlexVault can set up an exclusive space for sensitive information by tapping on a few hot keys, providing utmost privacy and security to the data conveniently.

Operation Director of Plextor, Eva Lee, expressed, "Facing the market trend of TLC SSDs with high cost performance ratios, consumers have higher expectations for the product's lifetime, efficiency and reliability. In response to this, Plextor has applied various advanced technologies and components, building the much more reliable M7V product series, providing the best data stability and security with various fast access-enhancing and troubleshooting technology while greatly increasing the SSD's lifetime, guaranteeing users the highest cost-effectiveness and protection for their SSD. As we deliver the M7V series, we will also make the PlexTurbo, PlexCompressor and PlexVault available to all M6 series users, and we promise to continue to provide premium services for the users of Plextor."

The Plextor M7V Series Solid-State Drives will be delivered in April of 2016, providing two different standard specs - the 2.5 inch (PX-M7VC) and the M.2 2280 (PX-M7VG), with 128GB, 256GB and 512GB capacities to choose from, satisfying SSD system requirements from desktop computers to ultra-slim notebooks.

Plextor is a leading developer of high-performance digital-storage equipment for professionals, consumers and enterprises. Plextor launched its first CD-ROM drive in 1989 and since then Plextor's prestigious multi-award-winning products have set the standard for quality and performance. Plextor will continue to deliver generations of innovative industry-leading products. The Plextor branded products are developed and sold by Lite-On Technology Corporation.